While it’s almost impossible to come up with a list of five greatest Asian films, coming up with such a list for Asian-American films–in particular, films that have, interwoven within them, bits and pieces of Asian-American cultural heritage–is a considerably easier task.  By no means it is trivial though.  Films like Mira Nair’s “The Namesake,” Jessica Yu’s “Ping Pong Playa,” and Wayne Wang’s “Dim Sum: A Little Bit of Heart,” all get at what it means to be Asian and American, and they fall just short in this list only because of the numbers game.

One of the first film that will likely come to your mind is the film based on the popular Amy Tan novel.  The character of Waverly Jong is especially memorable, both as a chess-playing prodigy who openly upset her loving mother as played by Mai Vu, and as a wife to a fiancé to a white man who is afraid of her mother criticizing her interracial marriage, as played by Tamlyn Tomita.  Who can forget the June Woo returning to China to see the lost daughters of her dead mother Suyuan?  This film is full of material directed at our “Asian-Americanness,” but perhaps one criticism may be that it’s based on a book that told most of the story.  However, Wayne Wang’s film manages to be one of the first film to address Asian-American issues, and was certainly the first big-budget Hollywood vehicle to take Asian-American culture seriously. 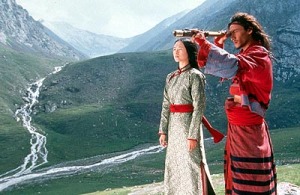 Another famous film that comes immediately to mind is a primarily Taiwanese production directed by an Asian-American director.  At the time, it was one of the most popular and influential martial arts films to hit the US market, and it showed us why Chow Yun-Fat is such a star, and why Zhang Ziyi is such a rising gem.  While the story gets carried away at times, the film has certain moments of artistic greatness such as the fight between Master Li Mu Bai and Jen Yu on top of the bamboo forest.  Perhaps the most commercial film on this list, it won four Academy awards out of ten nominations, and was the film that brought the traditional Chinese martial arts genre firmly into the American consciousness.  Not to be glossed-over is that a team of Asian-Americans made this film happen, and any shortcomings can be addressed by my kid cousin’s observation: “boy that was a fun film to watch!”

The only film directed by a non-Asian American director, this adaptation of a David Henry Hwang play addressed a theme frequently overlooked in American movies, and in particular, in Asian-American cinema: alternative sexuality.  While Jeremy Irons gives a strong performance as a French diplomat in love with an opera singer, Rene Gallimard, it is John Lone who gives a brilliant performance here.  Lone defies the convention of portraying Asian men as the Charlie Chan type, i.e. a service to society.  He plays a conflicted transvestite with a questionable sexuality and complicated emotions, much closer to the truth of what Asian-Americans are.  David Cronenberg is known for taking major risks with his films, and this one is no exception, featuring deceiving imagery, dramatic sexuality, and stark revelations, such as when Gallimard unmasks his 20 year lover with “you are nothing like my Butterfly.”  The reply was, “are you sure?”

The only undoubtedly comedic film on this list is the first great American film shot entirely in mainland China.  The story cannot be any closer to what Asian-Americans were going through in the 80s and 90s.  The computer programmer Leo Fang goes home to China for the first time in 30 years to visit his relatives after quitting his job due to what he perceives as racial problems.  That’s the story.  That’s it.  But it’s the little things throughout the film that hits the chords, and tells us why the divide between East and West is such a Great Wall.  Everything from Chinese people dancing to old American songs, Fang bringing an electric blanket to the incredulous brother-in-law, Chinese mothers opening their daughter’s mail, to the father-son relationship parallels of East to West and earlier to later generations.  The son Paul is who we’d relate to most.  He grew up in America, loves sports, and hates the squatting toilets of Beijing.  The film is also about Chinese conceptions of Chinese-Americans.  The Chaos automatically think the Fangs are promiscuous, violent, and independent.  At the end, they learn as much about themselves as about each other at a Ping Pong tournament.  Wang’s film is not a Hollywood film, which would never take portraying Asian-American struggles to integrate into its native society as a priority.  He wrote the screenplay and played the main lead, an almost Orson Wellesian effort for a Chinese-American filmmaker.

Perhaps an even more auteur-like effort is Wayne Wang’s first feature film, which eerily parallels Orson Welles’ classic “Citizen Kane.”  The Chinatown taxi driver Jo is searching for an ex-big shot in China who was involved in a flag-waving incident and disappeared with $4000.  The Chan that he is searching for is (he thinks) the fresh-off-the-boat hardship-survivor from China who came to provide for his children.  Like in “Citizen Kane,” the detective never finds out the whole truth.  He has lifted up the veil to understanding his own heritage, but he can’t quite grasp it.  It’s as if Wang opened up the film to show us what we Asian-Americans are missing.  Contributing to the innovation of this film is how everyone misconstrues Chan.  The patriotic old man in the recreation facility thinks Chan loved his country so much he went back.  The jilted Mrs. Chan thinks his husband left for another woman.  The idealist English teacher thinks Chan shot someone as a Communist sympathizer during the flag waving incident.  Each person projects her own view of the world onto Chan.  The mix of cultures is ingrained in this film, as the Virgin Mary stands in front of a Chinatown backdrop, as Chinese pop plays over the American West landscape.  Wang’s film’s more than any other on this list, shows us what it’s like to live in a multi-cultural world juggling many diverse heritages.  The Chan that he deemed missing is found within Jo himself as the camera looks deep into the taxi driver’s face.  Wang’s first feature is a tour de force touching on issues we grapple with and fail to understand, and as Jo says, “what’s not there seems to have just as meaning as what is there.”  That, of course, is a Chinese saying.