Can activities bring people together in a way beyond them working in separate terms? We wanted to investigate the way people interact in a diverse environment that tailors activities to their particular interest, and find a way to make a new interactive paradigm that brings people together from very different backgrounds. As such we chose as our site Bryant Park, a place where ping pong, reading, dancing, chess, and socializing can all happen at the same time.

Bryant Park in New York City was a battle field in the Battle of Long Island, a reservoir for water transport, and even the site of Crystal Palace during a world’s fair. Its own diversity in history is mirrored by the different uses visitors make of the park, with various free public games and sports and libraries, spaces that are compartmentalized for different occasions. The most numerous visitors may be tourists, who come in droves, or by themselves, mostly equipped with cameras. Although they can be seen waiting, and their interaction styles are mostly fast paced, quick photo followed by walk-arounds, and often purposeless. 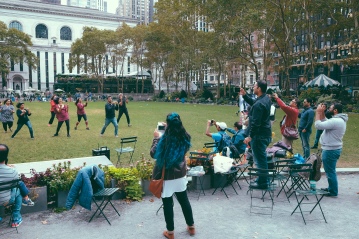 In the other extreme are the NY residents, who come with specific purposes in mind and tend to stay for a long time. They partake in physical activities like ping pong and juggling, as well as mental activities like chess and crosswords.  We took timelapses to map the positions of people visiting Bryant Park and found that residents and tourists tend to be separated in space into different areas of the park. The interaction often only consists of the tourists taking pictures of the residents. Our statistics for one afternoon during a practice of dancing for the residents showed that tourists tend to stand around admiring while residents put heart and energy into their activities (see graphic below). 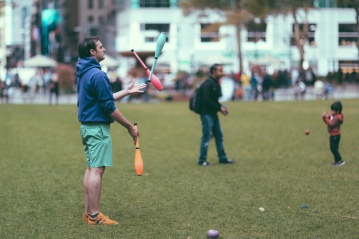 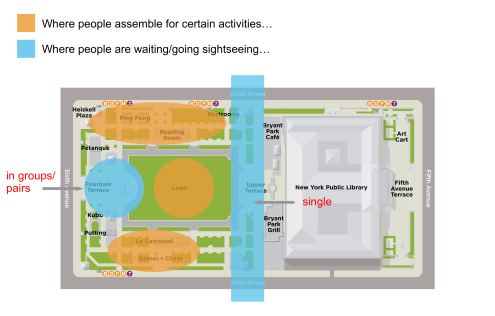 One thing we noticed is that in certain activities where teaching and learning are involved, residents and tourists would interact in unexpected ways. For example, we came across jugglers who came regularly to Bryant Park. One female tourist was amazed at what she saw the jugglers did, and came closer to admire it. At this point one of the experienced members of the club came and showed her how juggling is done, not by doing it himself so much, but by helping her learn. We wonder if we can create an activity that also leverages this possibility of interaction that comes from teaching and learning something the residents know about. 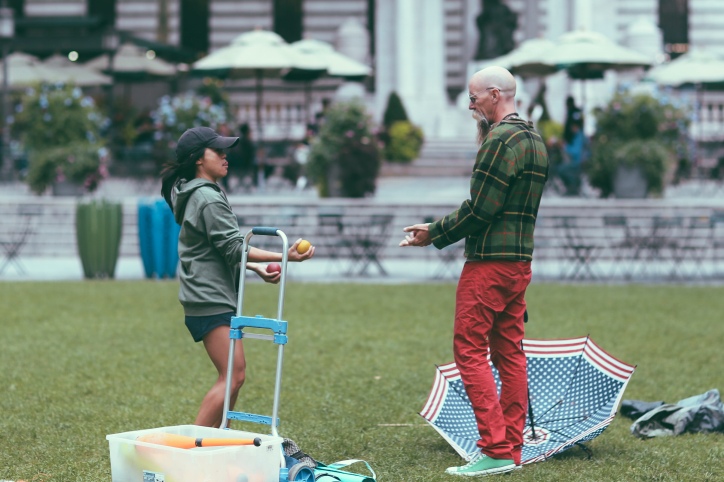 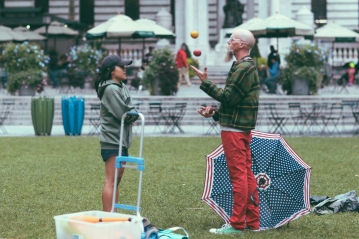 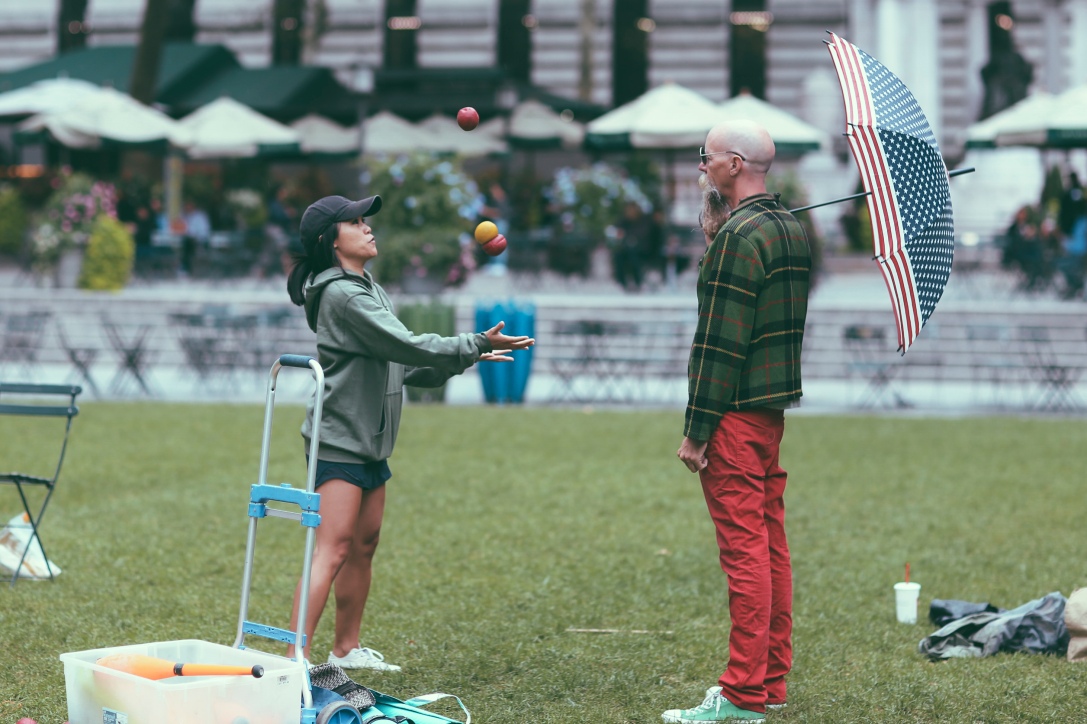 Another thing we noticed during our observation is a lot of people doing crosswords in the games corner. This is surprising because game areas are usually reserved for chess, backgammon, and other board games. In one instance we noticed tourists looking inquisitively at the crosswording residents. Inspired by this, we wonder if we can bring the two purposes of crosswords together in one activity much as the jugglers did: 1. crosswords for residents who find joy in the activity, 2. crosswords about Bryant Park for tourists to learn about what the park is and where different amenities are.

We hope that residents will help tourists with parts of the crosswords that are difficult, especially those from international destinations who may not even know much about the activity. One activity to bring two groups of previously seldom interacting people together!

For our first prototype, we created a giant crossword on a cardboard with photos attached separately indicating the names of places in Bryant Park. Visitors are invited to use the markers supplied to fill in the blank crossword. Unfortunately we didn’t get much interaction. We found this out when the park ranger came and offered to help us fill in the crossword. Some of the clues were also too difficult. Moreover, it’s hard to flip through the clues leaflets, and the board was quite drab. We found out the hard way that people have short attention spans. In one instance, cuddling lover would do their thing right next to our puzzle, with total disregard of what’s next to them. We knew that to make the situation better, we needed to improve the prototype’s attractiveness to visitors. 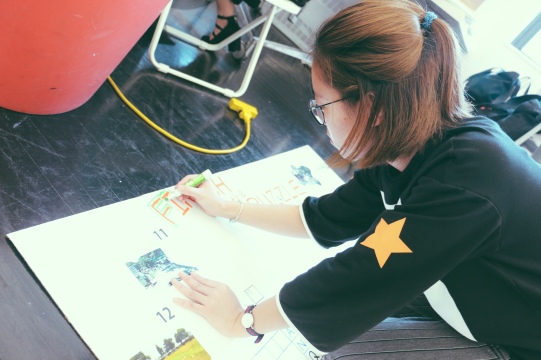 For our next prototype, we put the images directly on the board so that people don’t need to flip pages. We made the board more attractive using colorful characters and graphics. To invite participation we made the puzzle a bit easier and prefilled some of the more difficult blocks. Importantly we used cardboard to make individual letter cards that people can just paste quickly onto the crossword without having to write down anything themselves. This means they only have to move blocks around and not create new ones, inviting a new way of interacting with the board.

Using this new prototype we saw not only many “looks,” interactions with visitors, but also visitors interacting amongst themselves, with residents helping tourists and also tourists doing more than just taking pictures, but rather taking stock of the interesting facts about Bryant Park. We talked to several tourists after their visit to our crossword.

One couple from the UK remarked that the board really caught their eyes, and that it was easy to pick up the pieces. A group of local schoolmates remarked that the “petanque” (a lawn ball game) was too hard, and said that they even changed the partial solution on the board because they “needed the pieces,” pointing to an unsuspected interaction style.

In the vast mass of urbanity that is New York City, we found that interaction between tourists and local residents are still possible if the right activity is devised in the right environment. Like the juggling happening at the lawn, we created a giant crossword puzzle that could bring people previously relegated to different parts of the park together. The next step will be to find ways to invite sharing of more personal ideas on the platform so that people can get to know each other better, not just by playing a knowledge-based game. It will make the instruction set even richer for testing.